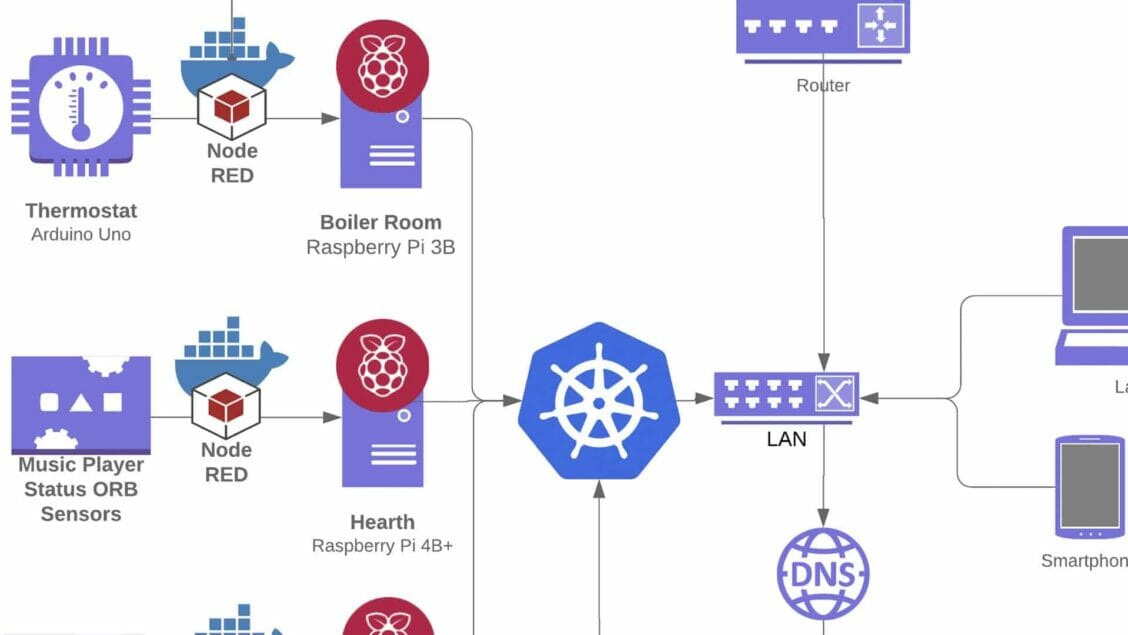 There are many. ways to design an IOT network. Deploying home automation with Rasbperry Pi(s) is a relatively new approach, but one which has many advantages.

Why Kubernetes for IOT?

There are many advantages to placing a single Raspberry Pi 3B (or better) in each room in the house. The Raspberry Pi already comes with many useful ports, including:

Each of these things would require more hardware when building on ESP, or when using Featherwings. This makes ESP great for small, single-function tasks that run on battery power. But a Raspberry Pi 3B costs just $25 at a local Micro Center (or $40 on Amazon).

This enables many simultaneous features for each room in the cabin, ultimately cheaper than buying individual ESPs:

A Raspberry Pi 3B also happens to be about the minimum device necessary to run Kubernetes.

I used Kubernetes at work for years. I came to appreciate how easy it was to manage a large fleet of hardware. It inherently provides many of the benefits of IOT mesh solutions. Discovery, load balancing, observability, and other such tasks become easy.

Allow me to explain…

Arduino Nano and Uno devices are on the left in the following diagram. They are essentially USB peripheral devices attached to the Raspberry Pi, as described in the Raspberry Pi temperature sensor with Arduino.

Notice that there is still room for ESP devices, where appropriate — shown in the top left. Because they cannot run Kubernetes, they must report to a Raspberry Pi through other mechanisms.

My preferred approach is a “pull” mechanism similar to Prometheus. The ESPs (or other wifi devices) run a HTTP server that Node RED can query and then pipe to Home Assistant (see below). The advantage to this (as opposed to one where the ESPs contact the server) is greater isolation and division of responsibilities. The ESP doesn’t need to know whom to report to, nor how often to do so. If the device malfunctions, there’s not just a mysterious blank spot in the data. Instead, the agent which collects the metrics has the opportunity to report rich error details. For example, the Node RED client making requests of the ESP can note the specific error (DNS, timeout, etc.) encountered when retrieving metrics.

Why Not MySensors (or similar)?

MySensors is an Arduino library that handles much of mesh networking. In practice, I found it much easier to iterate on Node RED and similar interfaces. The architecture requires “gateway” software, which I found to be more complicated than simply integrating into my existing network (i.e., Kubernetes, Home Assistant, Node Red).

I also take some small comfort in the fact that the Kubernetes cluster is isolated and virtual. The subnet is secured from the outside world — even people on the Wifi network.

Node RED is an extremely flexible piece of software, and fast to develop with. It comes out-of-the-box with MQTT, HTTP, and other common interfaces. There’s a great community add-on that provides first-class support for Home Assistant.

In practice, this means any data Node RED can access can be piped into a Home Assistant entity. Because Home Assistant has built-in Prometheus exporting, it’s then easy to graph this data in Grafana:

In the end, using Kubernetes for Home Assistant may have a bit of a learning curve for those who have not done so before. But as prices fall, and Raspberry Pis become even more affordable, I think it makes sense to use for IOT.

The last benefit I’ve yet to mention is the ability to tear-down and re-build the entire cluster in practically no time. Since all of the deployments are contained in yaml files, I can literally swap out one machine for another in under thirty minutes. The isolation that containers provide means that, as long as I don’t lose any persistent data, it’s absolutely trivial to make changes.

In short, Kubernetes was slower to start, but now is much faster to develop with.

Dashcams (video cameras in cars) are a great security and safety feature. As with the rest of the vanlife IOT, I built my own dashcam that has some unique features — like motion detection and automatic recording. On its surface, this is a post about...

DSL may be less common these days, but it is still a fact of life for some. Unfortunately, many DSL modem router combination devices are outdated and slow. This leads to many home owners being unnecessarily frustrated with the internet connection...

Building a multi-room home audio system begins by making "dumb speakers smart." Like with Sonos, these DIY wireless receiver(s) can be grouped together and play music from many different sources using pulse audio + snapcast. This post will explain...

How to Replace a Thermostat with a Raspberry Pi

HVAC systems can be very elaborate. But with some research, it's surprisingly easy to learn how to replace a thermostat with a smart, programmable Raspberry Pi thermostat. Even basic, student-focused electronic kits contain all the parts necessary...