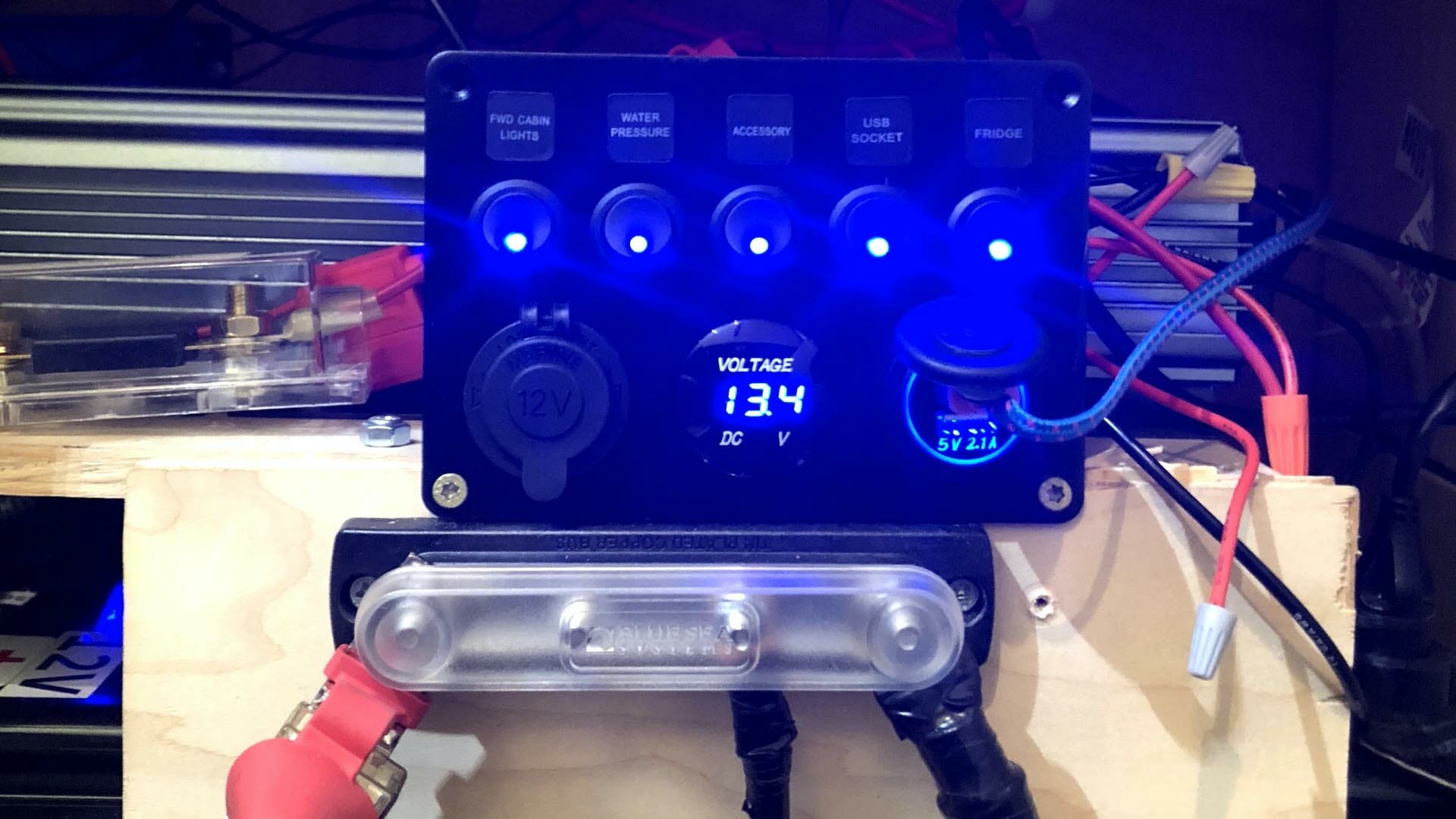 Once I had planned and installed the solar panels and battery in my tiny-home/van, I was prepared to begin wiring everything up for my camper van electric conversion.

Okay, maybe prepared is an overstatement. I was… eager, then. It was March, and I hoped to take it skiing at least once before the mountains closed. With short days and cold nights, I had a deadline to get the lights shining. In this post, I’ll cover how I prototyped my initial circuitry for the van, and sketch out how it evolved.

Some engineers like to design a system in its completeness first. If they don’t know how to do something, they read until they understand.

I prefer to prototype.

What is oft forgotten about prototypes is that they are meant to be thrown away. This makes them appear inefficient on the surface. But this is especially untrue when learning new skills or charting new territory. Prototyping it’s the most efficient way to learn, and also the most likely method to produce good results for a novice. Instead of trying to plan the perfect solution, embrace the fact that requirements will change as the project takes shape in your mind. Far better to build a couple cheap plywood-and-plastic solutions than ruin the pretty hardware. As I mentioned when benchmarking my energy needs, I have little experience in electrical engineering beyond the required one or two college classes for a computer programmer. Everything in my van was cobbled together from the blog posts and other online resources in my first post.

What does prototyping a camper van electric system in a van look like? Let’s first take a step back and cover some basics…

As complex as modern electronics have become, circuits are really quite simple. I already covered amps, watts, and volts as well as the advantage to direct current in the last post. But no current flows unless a circuit is complete. Hopefully this will be sufficient primer (or reminder) for anybody trying to wrap their heads around designing a circuit.
Every complete circuit is comprised of at least three essential parts:

Electrons in a circuit are often compared to a liquid flowing continuously in a circular pipe. You might think of them as propane providing fuel to a lamp (the load), and the battery as something that pushes the fuel along. The load burns up a little from the wires/pipes as it passes by. The analogy breaks down a little at this point because propane cannot be returned to the tank, but the hypothetical continuous-flow propane-lamp is still a good mental image.

Once you have those principles in mind, you can take any load, look at its rating (volts and amps) to make sure it will work with your circuit, and connect it to the battery. However, especially working with big batteries, it’s important to add a fuse or circuit breaker to protect your hardware (covered below).

If you’re still not feeling comfortable with the principles, or you’re the sort who likes to dive in, here’s a Khan Academy course on the subject of circuits.

A word about safety: you should not let your self become the wire that completes the circuit to your battery. If you’re at all new to the topic, please take a moment to educate yourself on safely working with electricity before diving in.

If you look at the photos above, you’ll see wires coming into and out of “bus bars,” which are a simple way to create a parallel circuit. Instead of one connection to each battery terminal, I wanted three connections. I preferred to think of my system in three sub-divided parts:

In each circuit, I wanted a cut-off switch. It becomes very useful to be able to completely kill one of these three if needed, such as when trying to safely and definitively remove all load. My favorite solution, after testing several switches, ended up being these combined in-line switch/fuses ($11.99). They’re low-profile and easy to toggle, and with the addition of circuit breaking they provide some peace of mind. At 100A each (though they come in different sizes), this capped each of my circuits to ~1,200 W on my 12v battery, which was well below my projected needs (that’s about how much an electric kettle uses, which would be quite luxurious on the road). I was also far happier with the way this switch attached to the wire, which proved much more durable than other options.

Another great purchase was the marine switch ($39.99), depicted in a later prototype on the right. The DC load mentioned above simply goes into this switch-board, which serves as a master on/off for each major circuit (and provides a fuse for each). For example, all of the cabin lights are connected to one switch, the refrigerator to another, and the computer to a third. You can also see the 3,000W pure sine-wave inverter behind it. I rarely ever use the AC system, but it has 3 standard outlets on the back.

A note about voltage readouts: it took me some time before it made sense why battery readouts are in volts. We like to think of our batteries in terms of “percent full,” but that’s not precisely accurate to how circuits work. A key trait of a complete circuit is that the positive terminal of the battery has a higher voltage than the negative terminal. When a battery is “dead,” what has really happened is that the difference between the two has gotten too small to power a circuit. All of this is to say: the voltage readout is actually a more accurate way to think about the ability of your system to work, even if it does not provide a good sense of how much longer it will continue to work. The ability to calculate the latter actually ends up becoming a rather complex equation involving temperature, among other things. Incidentally, this is why your phone seems to drain so fast in cold weather.

I found posts like this one, with complete part lists, very helpful when I was buying my prototype equipment. However I found that the parts I actually ended up liking differed a bit. Here is a complete list of everything I used to build my system in its current form.

I’ve skimmed over some topics in this post, like choosing the right gauge of wire, in the spirit of prototyping a camper van electric conversion. For many months, the wires in my system were tucked behind walls or taped to the ceiling. Not too much changed materially in the circuits. I was just figuring out exactly where I wanted to put the switches and what kinds of lights I wanted. Eventually, I began hiding the wires away.

I’ll share some more details in a later post about how I incorporated a low-power DC computer and some nice aesthetic touches. Hopefully that’s enough to get anybody started wiring their camper van electric/solar system. 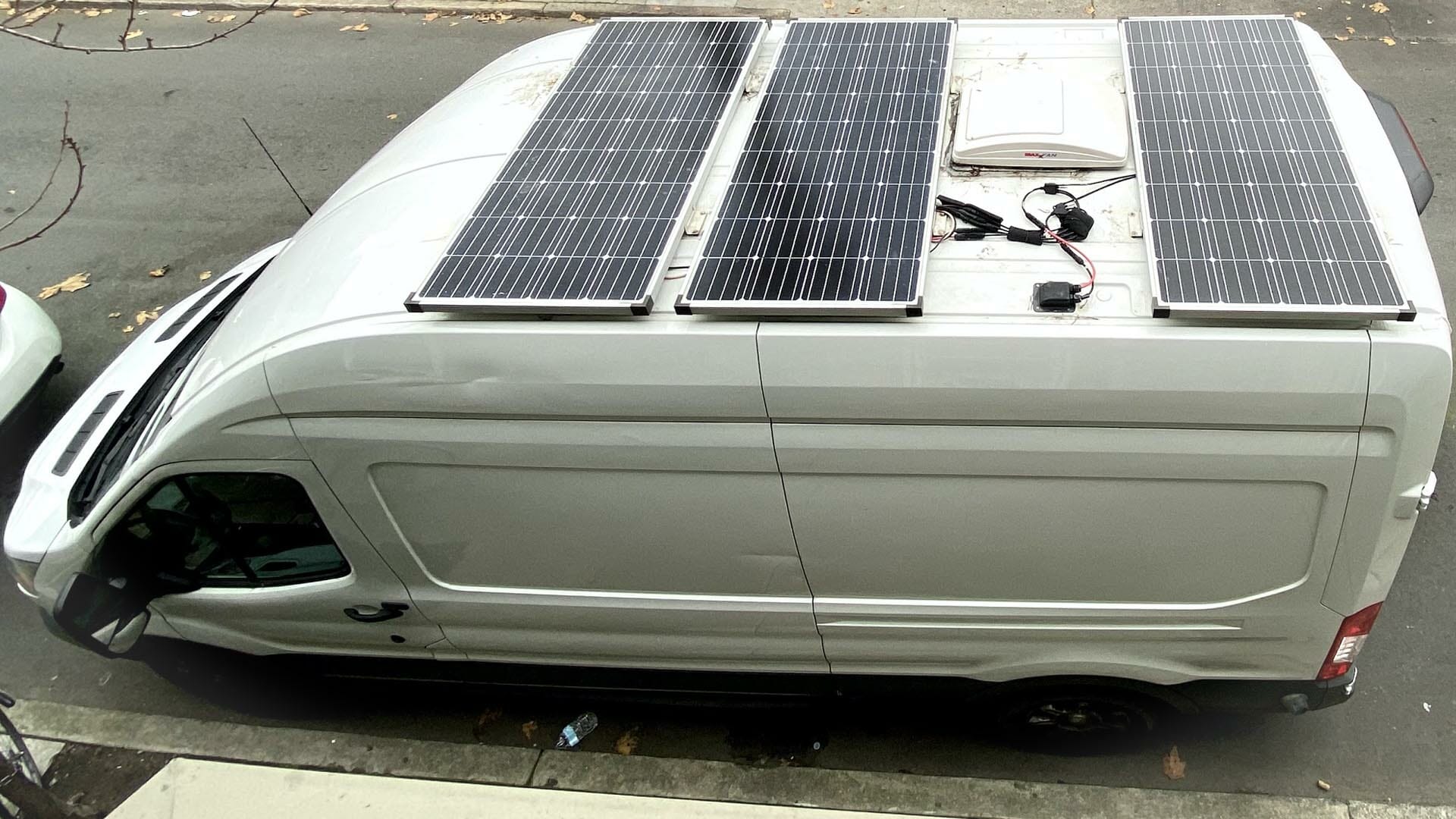